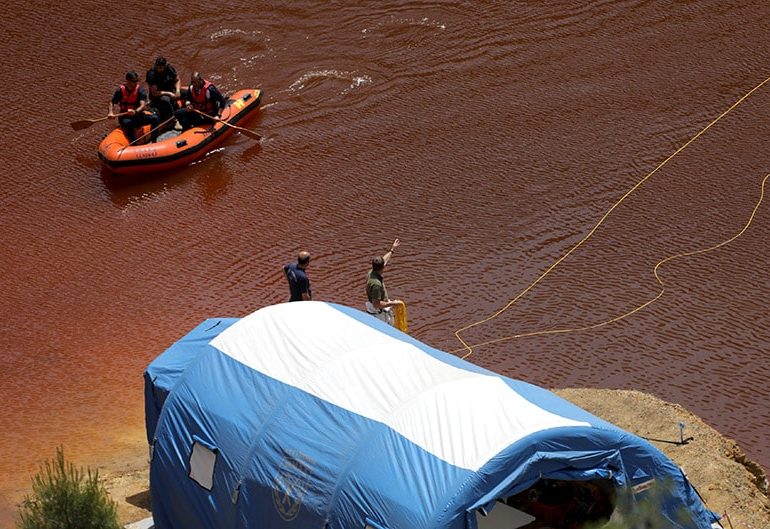 Efforts by specialist divers and teams to locate and retrieve the remains of murder victims from the red lake in Mitsero and Memi lake at Xyliatos continued on Wednesday for the 18th day. However it not not clear how close or far away crews might be to pulling two more suitcases from the toxic water.

The first of three total suitcases that the murder suspect, Nicos Metaxas, 35, told police he dumped was found on Sunday. The suitcase contained the body of an adult woman in a foetal position and fully dressed. The previous three victims, found elsewhere in the area, had been naked and bound and wrapped in sheets.

After the operation was called off for the day on Tuesday, the five-member team from Scotland Yard who arrived on the island on Monday at the request of the chief of police were taken on-site to the red lake later on Tuesday afternoon for a forensic examination of the crime scene.

The team, among them UK-based Cypriot state pathologist Andreas Marnerides, were briefed for 45 minutes on Tuesday morning by members of the Cypriot investigating team and the chief of police.

The UK team consists of a pathologist, a clinical psychologist who is a special advisor with experience in such crimes, and investigator specialising in serious crimes, and two other experts.

The search for more bodies at the red lake was “extremely difficult and dangerous”, but under no circumstances would the investigation be called off, police spokesman Andreas Angelides said on Tuesday.

“If plan A doesn’t bring developments, there are alternative plans to ensure that the investigations are more effective,” Angelides said speaking at the scene. He suggested that everyone remain “calm and patient.”

Efforts had resumed at the red lake by 9am on Tuesday, with conditions of visibility in the water relatively more favourable for the task of locating the remaining two suitcases using the robotic camera.

Near-zero visibility on Monday set back the coordinated efforts by the fire service and specialist divers of the private company Brasal to retrieve the second suitcase.

The crews scanning the red lake had by noon marked three locations in the toxic water with buoys.

A post-mortem on the body found in the suitcase retrieved from the lake on Sunday was inconclusive as to the identity of the woman and her cause of death. Authorities are now waiting for DNA and histopathological tests.

She is either Romanian national Livia Florentina Bunea, 36, who went missing with her daughter Elena Natalia aged 8 on September 30, 2016, or 30-year-old Maricar Valdez Arquila from the Philippines who disappeared in December 2017.

The body found on Sunday was the fourth victim recovered by authorities so far. Metaxas, an army officer has so far confessed to murdering seven people, five women and two children aged 6 and 8, all of foreign nationals, police told the court on Saturday during a new remand hearing.

The ongoing search for six-year-old Sierra Graze Seucalliuc at the second location of Memi lake at Xyliatos was also unsuccessful on Tuesday. Police are to acquire special sonar equipment on Friday from the US that will be used on the Xyliatos lake on Saturday morning as no trace of the child has been found yet.

Sierra is the daughter of the first victim found on April 14, Mary Rose Tiburcio from the Philippines. Mother and daughter had been reported missing last May.

Specialist divers scoured previously unexplored areas of lake Memi on Tuesday, as the search had in previous days focused on specific areas marked as crucial which displayed characteristics heterogeneous to the surrounding features, leading authorities to suspect that the body may be in those areas.

According to state broadcaster Cybc, new locations deeper into Memi lake were marked using buoys, indicating that the search for Sierra at the specific location will continue.

The body of Tiburcio was spotted in a mine shaft by a tourist to the Mitsero mine after heavy rains brought it up to the surface. This find was followed a week later by the recovery of another woman’s body from the same shaft, said to be Arian Palanas Lozano, 28, also from the Philippines who disappeared in July 2018. Lozano has not been officially identified yet.

Days later, authorities found the body of another woman near the Orounta firing range who has been named as Asmita Khadka Bista from Nepal who used the online name Kata Anou and had been in contact with ‘Orestis’ – the persona used by the alleged killer – last year on social media site Badoo. At least two of the other victims had had contact with Orestis on the site.

Bista’s traces were lost in early 2018 after she was seen getting into a white car, reports said. Her friends had told the Nepalese Consulate she was missing, but had not reported it to police.