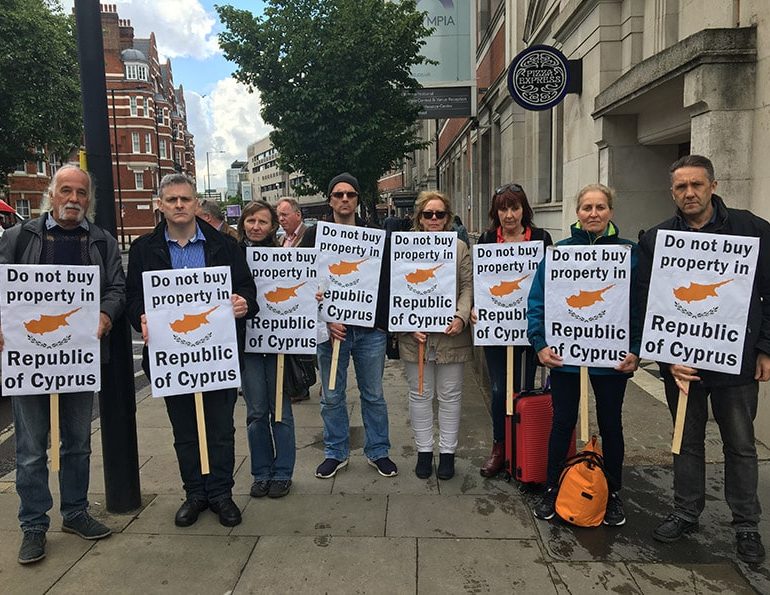 A protest aimed at warning the British public not to buy properties in Cyprus took place on Saturday outside a major property exhibition in London.

A small group of people who had bought property in Cyprus gathered outside the Olympia in London where A Place in the Sun Live was taking place. Two Cypriot companies were among those taking part.

The aim of the protest was to warn off potential buyers from investing in Cyprus citing their own unfortunate cases that include homes destroyed in an ongoing land-slippage in Pissouri,  Swiss Franc house loans and a double selling fraud.

The organiser of the protest is Conor O’Dwyer, who is the midst of a 14-year legal battle after buying a property in Cyprus in 2005 only for the developer to sell his house to another British family at a higher price. According to O’Dwyer not only was the original sale to him registered with the land registry department, but the developer also kept the money he had paid.

The protesters, holding placards saying ‘Do not buy property in Republic of Cyprus’, handed out flyers to potential buyers as they went inside the exhibition.

The event is the official exhibition of the Channel 4 TV series A Place in the Sun and, according to its organisers, “the largest overseas property exhibition in Europe”. It was described as the perfect place to seek guidance through the buying process for a purchaser to find their “dream properties” abroad.

On Saturday morning, a discussion was also held at the exhibition on buying property in Cyprus.

O’Dwyer said that the protesters were engaging with British buyers but also with property companies from other countries and media from the property industry.

“Enough is enough, that’s the theme of the protest,” he said.

The leaflets explain to potential buyers the reasons why they shouldn’t buy in Cyprus.

“Because corruption (in Cyprus) is rife,” he said.

Developers, he said, will tell exhibition visitors they are secured as long as their contracts are in the land registry.

“No. My contract is in the land registry and my property developer sold my house to another person at a higher price to profit more,” he said.  “A court case in the Republic of Cyprus takes 13 years.”

Some of the protesters are victims of the land slippage in Pissouri, he said. 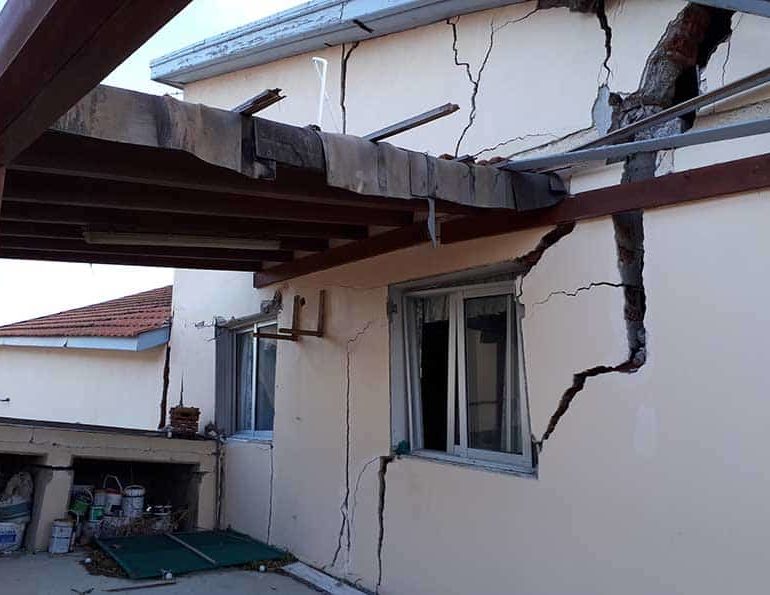 The case, which has received widespread publicity in recent months, involves homes built in the Limnes area of Pissouri which have fallen victim to a serious and continuing land slippage.

The land is now slipping at almost double the rate it did in 2015 when the movement was up to 40cm per year. By early March, five families had been evicted, while, according to lawyer for the homeowners, Elina Zoi, 15 houses are considered dangerous but the owners continue to live in them as they have nowhere else to go. The land slippage is due to failure to provide adequate infrastructure to manage groundwater, and allowing development to go ahead in the area.

“House insurance does not cover landslides and it’s the government’s duty to help,” O’Dwyer said, adding that the only action from the government is forced evictions with the homeless British returning to the UK.

Another group at the protest are victims of the mis-selling of Swiss Franc loans to purchase homes in Cyprus.

“These contracts have been found as abusive by the EU and settled in other countries, but for some reasons the banks in Cyprus are holding out and are individually putting these people through hell as they go through courts,” O’Dwyer said.

Even the consumer protection service in Cyprus deemed these contracts abusive but these people are getting no help at all, he said.

This practice, he said, “has seen hundreds of Brits forced to give up their dream homes or face a decade of court action to retain it”.

The trend in borrowing in Swiss francs emerged in 2006, when Cyprus was a candidate for euro area membership. Those taking out loans in Swiss francs benefited from considerably lower interest rates compared to the then cost of borrowing in euros. But some four years ago, when the Swiss National Bank moved to unpeg the country’s currency from the euro, led to a sharp revaluation of the Swiss franc and many debtors saw their instalments going through the roof. A debtors’ association had said at the time some 11,000 people were affected and spoke of a scandal, arguing that banks at the time did not adequately inform customers of the exchange-rate risks in taking out loans in a foreign currency.

The aim of the protest, he said, was to inform everyone on what’s happened to them “and what’s happening to Brits every day over there in Cyprus”.

He expressed hope that their presence there would minimise “the danger to the British buying public” since there were only two Cyprus real estate agents at the exhibition.

As Conor’s lawyer I want to say that Conor is more than justified in protesting.
The reason that Conor had to come all this way and carry on protesting all these years is because in my opinion the authorities and the courts in Cyprus didn’t deal with his complaints and claims in a proper way! This man had a dream to move in Cyprus with his wife and his 2 lovely kids. He sold his house in England and paid a big amount as a deposit for the purchase of a “dream house”from Karayiannas developers.

Despite that his contract was filed with the land registry and he was the beneficial owner of the house they sold his house again without returning his money back and also delivered the house to the other buyer leaving Connor and his family without a house and without money. When he dared to complain on the internet and claim his rights the owners of the development company beat him up badly twice and the second time he ended up in the hospital for 6 days. Although the court found them guilty of the assault and sentenced them for 12 months imprisonment the judge decided to suspend the sentence despite the seriousness of the offense. Also in another private prosecution case he filed against the developers claiming that they fraudulently sold his house twice – the court decided that this didn’t amount to a crime.

In his civil case although he won the case and the judge said that it was unlawful what the developers did and they gave him compensation the compensation didn’t cover all his expenses, fees etc and at the same time the judge allowed a claim by the developers against Conor for libel because he published a website with the domain name lying builder. com in order to tell his story to other people and protect other buyers from getting into similar adventures.

Also although we managed to get a legal aid order for Conor he never received any money despite that we kept requesting the money. We have filed an appeal against the decision of the judge claiming more compensation and expenses than those that he gave to Conor as well an appeal against his decision to give judgment against Conor for libel although what Connor was describing facts and telling people that these developers acted unlawfully and wrongfully sold his house something that the same judge decided in his judgement as correct.

One of the reasons of our appeal is that the trial judge wrongly decided not to exempt himself from the case when I requested it since this judge during another procedure claimed that the recordings of conversations with the developers that Conor was doing could amount to a criminal offence and and criticised his behavior. The judge by doing so I claimed that he expressed a prejudiced opinion against him and it wouldn’t appear that he could evaluate Conor’s evidence for the civil case objectively and this amounts to unfair trial.

The appeal is still pending and we are now in the process of trying again to get legal aid for Conor and his wife. Conor has been hassled a lot all these years and I admire him for his continuous fighting spirit. His aim is not to hurt Cyprus but to get his rights , to protect other people from similar treatments and to make things better for the citizens and visitors of this country Although not everybody who bought properties in Cyprus had such a dreadful experience it seems that a lot of other buyers had bad experiences in one or another way and this created bad reputation for our beautiful country with all the negative consequences.

These protests of Conor and other people should be taken seriously and not to ignore them or feeling defensive so that we improve more our country for the common good! We have a duty to protect the human rights of all the people and safeguard the rule of law, democracy and the freedom of speech!!!!!